This past weekend we made a little road-trip to Mackinac Island. This is an island in the Upper Peninsula that, for historic and preservation reasons, has banned motorized vehicles since the 1900's. The inhabitants get around mostly by bicycles and horses. Although I think the horses are mostly for the tourists. It was very inspiring to me to see a town totally tied to the bicycle in a real functional way. I saw lawn maintenance crews using bikes to haul their equipment around, giant baskets on most of the bikes, and many tandem and three person bikes.

I had already been scheming to turn a baby bike trailer into a sculpture and package pickup trailer for the Visual Art Building here at Interlochen. So this was further motivation to do that. 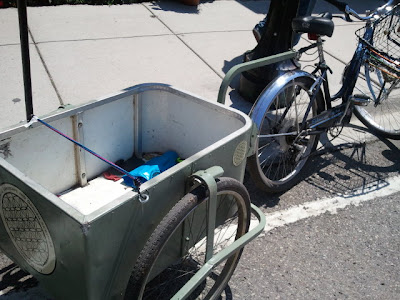 This lovely Schwinn has a giant basket, but this amazing well-built aluminum trailer. It attaches to the frame of the bike with an air-hose detachment, if that makes sense. Really ingenious and many of the trailers attached this way. 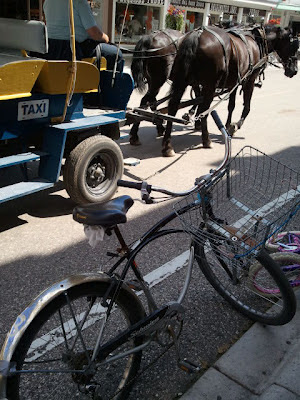 Now back to Interlochen Center of Art. Cars are allowed but they really aren't ideal for getting around all the campers and are frowned upon. It seems that all the other departments get these golf-carts to ride in, but for some reason the Visual Arts isn't on the A-list when it comes to golf-carts. That is ok. I'd rather ride a bike, but if we need to pick up some packages from the post office, get ice for a reception, or other random task, it'd be great to have a trailer for a bike. Much like at Mackinac Island.

There you have it, friends. I've been wanting to convert a baby bike trailer into a sculpture bike ever since seeing one in Chicago. Since I've always had a truck, van, or car it is pointless to have one. Yet, here at Interlochen Summer Camp there is a real use and need for one. Just like at Mackinac Island!