I was fortunate that the Portsmouth outdoor exhibition was ending on the same month as the Charlottesville outdoor exhibition was beginning. As luck would have it, the Lovearch sculpture was accepted into both. I left Greenville on Tuesday morning, after meeting up with Jef Kiefer who graciously lent me his trailer.  I was a bit nervous, because although I've transported this sculpture before, it had been taken apart, and held in the back of my little pick-up-em truck (check an earlier post about that poor vehicle). This time, it was to be transported it in its entirety.

Lovearch fit onto the 10 foot trailer with just 3 inches sticking out the back. WHEW! Gayle was kind as usual, as we are old buddies at this point, and Shawn used a forklift to raise the whole sculpture onto the back of the trailer. I strapped it down with the AgriSupply straps I recently purchased and went inside to enjoy the two exhibits that Gayle had curated.

At the bottom floor was RADICAL ALCHEMY: Contemporary Art Jewelry from the tiny and shiny to the large and lavish.  Which had many friends of mine exhibited because, mainly, Amanda Outcault, an ECU alumni,  had been working at the Courthouse Galleries. So that was nice. Upstairs was a show called PULPFICTION: The Art of Paper which was also very nice with some origami pieces, laser cut art, newspaper sculptures, and a giant folding map of the James River estuary system.


After a quick bite of a bologna sandwich, I was on the road to Mechanicsville. My hometown on the outskirts of Richmond, in the heart of Civil War battlefield country. The sculpture drew many stares and people driving next to it to snap photos. But, alas, I was a nervous freaking wreck, as with every little bump sent my nerves on edge. I think I need a bigger trailer for such a tall piece, one with two axles. I went about as slow as I could, just to keep it from jostling around and flipping or who knows what.


I pulled into town after a couple of hours and it was still as secure on the trailer as ever. So maybe I didn't need to freak, but....sheesh, it took it outta me! I was spent. The next day I scheduled myself to touch it up, if it needed it. But it rained all day. I mean, it poured all day. I was able to go out when it slowed and with a rag kinda dried off some rusty parts at the very bottom of the bases to hit it with some spray paint, but really it wasn't too bad. As far as the aluminum, that finish I used with bowling wax and oil paint still looks ok.

Charlottesville is about an hour away from town, so I made it there ok. Elizabeth was waiting there with Kenny (I think). They had a huge crane truck, which they used to move the concrete pads to the right positions and then the sculpture onto those. Elizabeth had a lot of energy and was trying to use a giant prybar and a log to even out the concrete pads herself, until we called upon another city worker to help. This guy looked like a linebacker (a fine fellow!) and we evened them out with some 2x4's underneath. The day before C'ville had gotten like 3inches of rain and they had gotten pretty wet setting up Adam Walls' sculpture. The result was a huge wet hole underneath my sculpture and my feet had gotten fairly soaked.

She took some photos of me clowning with the sculpture for the press, we shook hands, and I went to the bagel shop for a salami bagel sandwich, yummy! I tweeted it too. It is near Market St and High if you would like to visit it. I activated the little google map pin down there if you are tech savvy.  Here are some cell phone shots of Lovearch in-site at Art In Place, Charlottesville, VA. Enjoy. 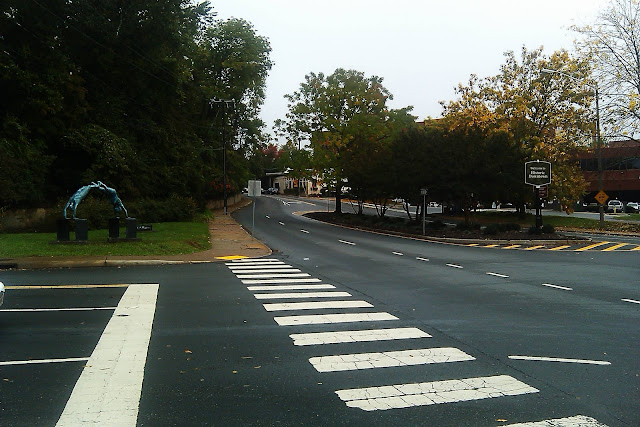 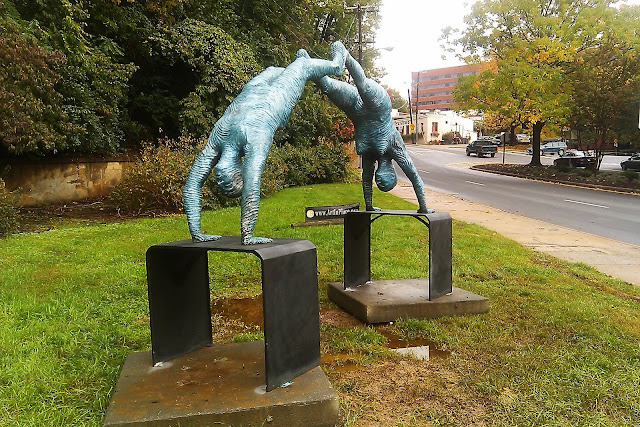 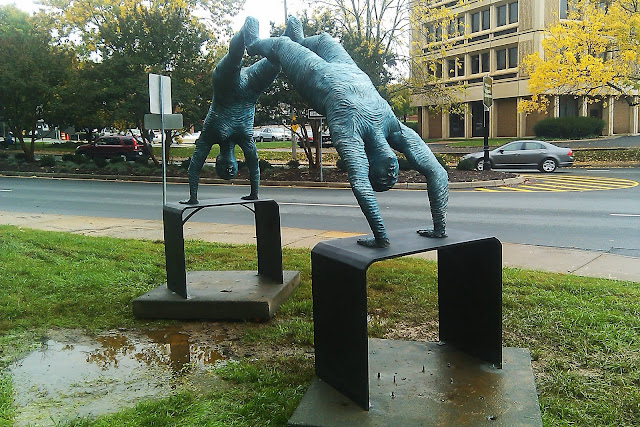 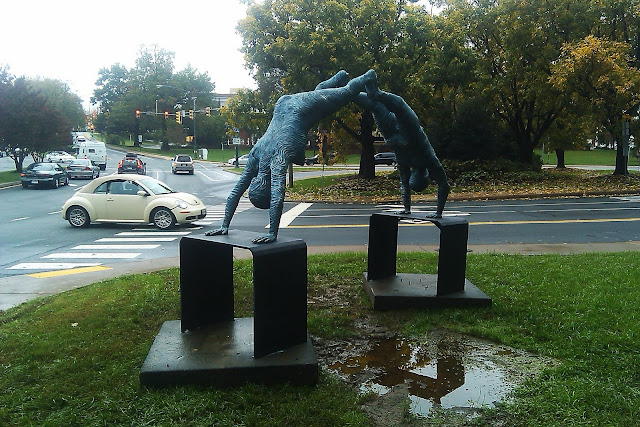 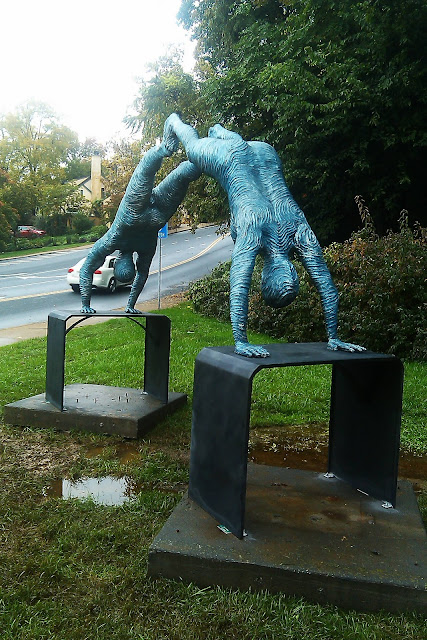