I recently installed this sculpture at the Maria V. Howard Imperial Art Center in Rocky Mount, NC as part of the Salmagundi XIX Outdoor Juried Exhibition. I made the sculpture as part of my thesis back in 2011. The figures are cast aluminum and the bases are steel, they have been powder-coated. I cast and powder-coated these personally while in graduate school at East Carolina University.

Every time I exhibit this sculpture I get lots of questions about its meaning. Usually people are concerned with the intestinal tract coming from the man's groin and entering the top of his head. It's time to clear up the air a little bit. I have copied the explanation of the piece straight from my thesis document at the bottom of this blog entry. Basically that pink business is his inner essence being unleashed or "un-coiled" through yoga practice. 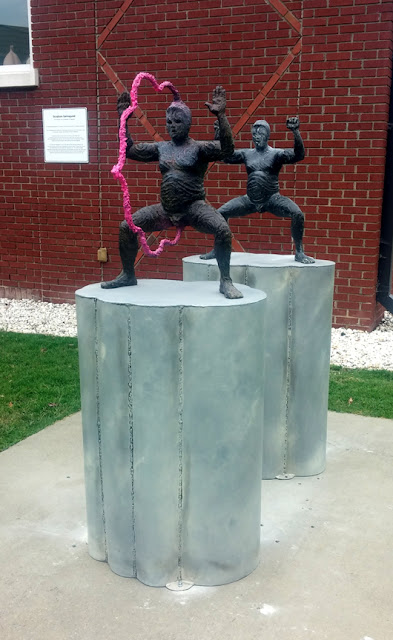 This cast aluminum sculpture is of a muscular yet rotund man in an awakened state brought on by yoga postures. He stands in an asana that connotes power and grace as in the previous piece, Coiled Kundaurasana, but with the addition of a scalloped serpent-like shape connecting the top of his head with the base of his spine. This additional appendage to the figure combines the idea of an external aura with the idea of an internal kundalini to make a unique emanation. Kundalini is believed to be an unconscious libidinal force which is coiled like a snake at the base of the spine. It is believed to be a corporeal energy that can be unleashed through advanced training in yoga or meditation. With this sculpture, kundalini is imagined as uncoiling and emanating from the figure like an aura. The neon pink emanation references the inside of his body, where kundalini is thought to lie, and the unnatural color that does not exist in the human body.
Kundaurasana in the title is an invented word, derived from three words, kundalini, aura, and asana. This is appropriate because this sculpture depicts these three things in synthesis. In the postural yoga tradition, it is common for names of postures to be compound words in Sanskrit usually ending with asana. For example; balasana: bal means child and asana means posture. So the meaning I attribute to the term Kundaurasana is a kundalini aura posture.

I have chosen an unrealistically dark coloring to portray that this is not the figure’s actual skin color. Not only does the black have rainbow glitter contained within it, but it is highlighted by a saffron. Saffron is a sacred color in Hinduism, as well as in Tibetan Buddhism. It is the color used for Tibetan Buddhist monks’ robes and ceremonial head covering. These saffron highlights, along with the neon pink kundalini and the cloud-pedestal he stands on, are meant to denote a powerful spiritual moment.

Posted by Andy Denton No comments:
Email ThisBlogThis!Share to TwitterShare to FacebookShare to Pinterest

Lovearch now on display at the Coastal Discovery Museum at Hilton Head Island, presented by the Community Foundation of the Low Country. This sculpture has been on display in Chapel Hill NC, Charlotesville VA, Portsmouth VA, and Knoxville TN. It will be in Hilton Head Island SC until this January. 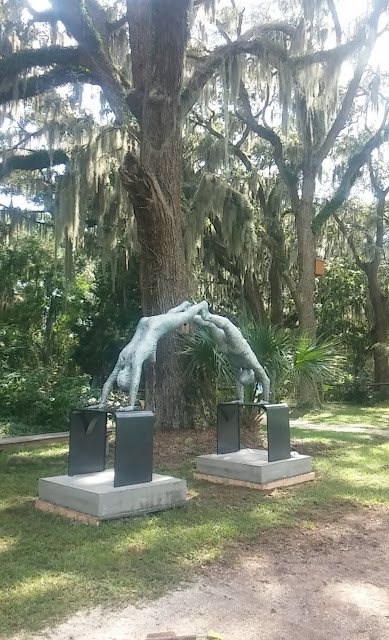 Here is a video of Lisa Jaye Young, Ph.D. during a tour of the exhibition in the pouring down rain. Hurricane Joaquin was on its way up the coast, but it did not deter these art patrons from going to to the opening.