This blog post is about Mike Hamer. Whatever I could find online about him. There's some links to his music and some YouTube videos uploaded by his friends. I also sprinkled in some comments made on Facebook when he died.

Mike was a bright light when he wheeled into a room. I am honored to be his friend. One of the last times I got to see him was at his birthday party in Greenville when I was on my way to Michigan from Florida, it must have been in June 2017. He was surrounded by friends and family and they did a round robin of music-playing in his backyard. It was a magical experience hearing him and his friends play all this great music with guitars and their voices. He was very loved.

I got to know him from the Maxwell Family aka the NuClear Twins, whom he often played concerts with the last few years of his life. I was going through my own personal tragedy and, its hard to deescribe, but being around someone like Mike made you feel good.  After I heard of his passing that Sunday morning, I found him again on Spotify and even though I was somewhat familiar with his music, I was blown away by the music he had recorded. It reminds me a little of Tom Waits and Bob Dylan because his voice is rough and warbly, but within it are some real gems. I love especially the irrelevant songs and the tragic ones and the tragic/comedic songs. He had a great sense of humor.


Mike Hamer has been writing and playing songs for adults and children for over 40 years. Paralyzed in a diving accident in 1985, Mike took up the hammer dulcimer and has continued to entertain audiences young and old alike. Lately, he has been performing on the Casio PT100 and is performing with the Cantankerous Casio Tour.
Mike focuses on classic American folk songs that give people a sense of their roots, and he loves a good sing-a-long. His original work ranges from Americana to lullabies to rock ballads, rhythm and blues, and even the occasional tango. He performs both solo and with various combinations of musicians and has released seven albums of original songs as well as a children's album and the most recent, a collection of lullabies featuring Julie Beutel.
Mike teaches non-fiction writing and the occasional songwriting course at East Carolina University. Living in Greenville, he hopes to record some new songs soon featuring Mike Hamer and the Cantankerous Casio Tour.

Bob Aiken - December 10, 2017 ·
"For me...there was no stronger, braver, or better man than Mike Hamer. He was my friend and my brother. And I will miss him immensely."

Mike in interviewed on the radio and talks about the accident.


"My first clear memory of Mike Hamer: I was, for a brief time in my early twenties, his neighbor on Park Drive with two other young ladies. We received an invitation to a Rumi poetry reading in his backyard, and it was one of the most magical afternoons I have spent in town to date. Mike was one of those special people who could brighten the darkest of days. Here's to the next rung on the ladder. Rest easy."


This is pretty dang awesome.

"Mike Hamer performing at our wedding. He lives forever in the hearts of everyone who met him or heard his music, or just know those of us who hold him dear to our hearts, because he lifted us up."

Not sure what this is exactly but Mike singing with Sue Luddeke and others. Its cheesy but great! :-)


"My camera was acting up and the shutter didn't open all the way. But it made a different sort of focus on Brandy, Mike and Tabitha"

I found Love Dust an amazing album where he talks about being in a wheelchair in a tragic and funny way. 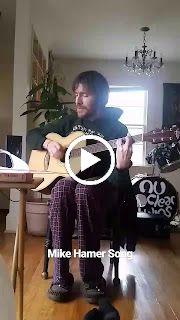 I missed the funeral by being in Florida, but was able to visit near Christmas time and Nathan Maxwell sang Josephine for me. Its a great song.